Where did Mark Twain live?

The Mark Twain House and Museum in Hartford, Connecticut, was the home of Samuel Langhorne Clemens (Mark Twain) and his family from 1874 to 1891. Designed by Edward Tuckerman Potter in American High Gothic style, it was called “part steamboat, part medieval fortress and part cuckoo clock” by Clemens biographer Justin Kaplan.

Twain wrote many of his best-known works while living there, including The Adventures of Tom Sawyer, The Prince and the Pauper, Life on the Mississippi, Adventures of Huckleberry Finn, A Tramp Abroad, and A Connecticut Yankee in King Arthur’s Court.

The Connecticut Public Broadcasting Network presents an introduction to Mark Twain’s house and museum in Hartford, Connecticut. This video begins with a short promotional statement; the feature on Twain’s home starts at 0:25. You might visit in person if you live nearby!

Samuel Langhorne Clemens, later known as Mark Twain, was born in Florida, Missouri. The two-room cabin where he was born in 1835 has been preserved within a modern museum building at the Mark Twain Birthplace State Historic Site. Visitors may enjoy a reading room, several of Twain’s first editions, a handwritten manuscript of The Adventures of Tom Sawyer, and furnishings from Twain’s Connecticut home. 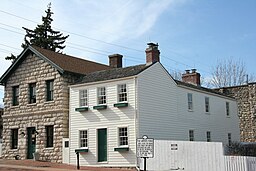 When Clemens was 4, the family moved to a two-story clapboard house on the bank of the Mississippi River. This home is now open to the public as the Mark Twain Boyhood Home & Museum in Hannibal, Missouri. The museum complex features the legendary whitewashed fence of Tom Sawyer plus an Interpretive Center, the Becky Thatcher House, Huck Finn House, J. M Clemens Justice of the Peace Office, Grant’s Drug Store, and a stone building from theWorks Progress Administration (WPA) era that houses a gift shop. There is also a Museum Gallery nearby.

If you found this exploration of Twain’s various homes to be helpful in understanding the how his environment shaped his life and work, you may enjoy some of our other Introduction to Literature (E1) videos.

If you’d like to learn more about the life and work of this author, we recommend checking out our collection of other Mark Twain Resources.

When will you read Mark Twain’s writing in Excellence in Literature?

E1.3 Honors text: The Prince and the Pauper